Summary: To build credibility for a managed IT company following a significant shift in their business operations, 3E PR executed a public relations strategy that integrated media relations, speaking engagements and award submissions. Find out how this approach is helping the company achieve its 5-year growth goals.

Challenge: TechWerxe provides small-midsize businesses in NJ with enterprise level IT services they can afford. The CEO of TechWerxe, Sejal Lakhani-Bhatt, turned to 3E PR for a PR campaign following the loss of her husband and business partner. TechWerxe’s objectives were to:

Results: 3E PR secured media coverage in top NJ business press, including a two-page profile piece about Sejal’s journey and how TechWerxe is thriving under 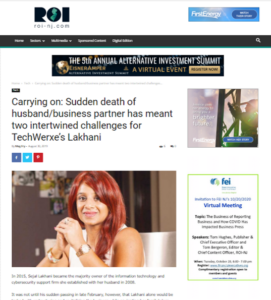 her leadership in ROI-NJ that has directly driven business leads. We were also able to garner coverage in women in business publications/podcasts and IT trade outlets. Sejal spoke at multiple NJ events that drove awareness among her target audience, including:

Since the launch of the PR campaign, Sejal has received the following awards and recognitions:

The media coverage and speaking engagements 3E PR secured for TechWerxe has helped the company achieve all its objectives in less than one year. As a result of the third-party credibility established through the PR campaign, TechWerxe showed stability during a time of significant change and was able to retain all its clients. Sejal has become recognized as a leading woman in business and is now being sought after for speaking opportunities. TechWerxe was able to begin on-boarding new clients who became aware of the company through the various components of the PR campaign. This growth has positioned TechWerxe to achieve its 5-year growth plans.