What Peloton Got Right and Wrong With Its 2019 Holiday Spot

I didn’t realize how much writing this blog would change me.

If you had never heard of Peloton® before, you’re almost sure to have in the past few weeks, thanks to a controversial commercial that began airing during the 2019 holiday season. I’m not going to lie, it’s pretty bad. But is it as bad as everyone is saying? Let’s take a look.

“The Gift That Gives Back” spot features an attractive, young woman receiving a Peloton bike as a Christmas gift from her husband and then filming her exercise journey over the course of the following year. We, as the viewers, realize at the end of the commercial that what we’re watching is a compilation video of all those workouts, which she appears to be presenting as a thank-you gift to her husband.

The ad has been widely criticized as tone-deaf and sexist, with some also calling it classist and even dystopian. Many viewers took issue with the fact that the woman is already in shape—which I’ll get to later—and she is often described as looking scared, while the husband is dragged for the implications and expectations that gifting his wife with an exercise bike could entail. The general consensus is that it just missed the mark. Following the backlash, Peloton’s stock dipped 15% over the course of three days in the first week of December.

A Peloton representative responded to the controversy saying, “We constantly hear from our members how their lives have been meaningfully and positively impacted after purchasing or being gifted a Peloton Bike or Tread, often in ways that surprise them. Our holiday spot was created to celebrate that fitness and wellness journey.”

Regardless of whether you’re offended by the commercial or not, it’s pretty 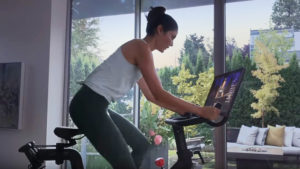 cringeworthy. Peloton defines its mission as using “technology and design to connect the world through fitness, empowering people to be the best version of themselves anywhere, anytime.” The woman in this ad does not seem empowered in any way, but rather she comes across as scared, insecure and nervous, even at the end of the commercial after a year of “enjoying” her gift. Even her comments are ambiguous. Upon receiving the bike, she exclaims, “A Peloton!” and the spot ends with her saying to the camera, “I didn’t realize how much this would change me.” Where’s the empowerment message? Why did she want to change? How did the experience make her feel? It’s too disconnected.

It’s also in such stark contrast to the prior campaign that I can’t help but wonder how and why this departure occurred. Yes, we still see an impeccably decorated home with the trademark floor-to-ceiling windows and scenic views, but the central character is a far cry from the motivated, high-energy people we’ve seen featured before. Perhaps the brand was attempting to show their sentimental side, or maybe they’re targeting a new market segment—I just don’t think the mission was accomplished.

Now, to those who criticize the brand for featuring a woman who appears to be quite fit, and whose physical appearance doesn’t change over the course of time depicted in the ad, let’s take a step back. Not every person who exercises does so to lose weight. There are a ton of other motivating factors, like endorphins, general health maintenance, marathon training…people even just like the way it makes them feel! And, yes, some women might be as appalled to receive an exercise bike from their significant other as they would a vacuum cleaner, but how many people do you know who would spend over $2,000 on a gift they weren’t at least pretty sure the recipient wanted? So maybe we can give this guy the benefit of the doubt and assume that was the case here.

Confession: I was gifted a vacuum for Christmas a few years ago that I still maintain is one of my all-time favorite gifts. It wasn’t from my husband, though, so I can’t say for sure how I would have reacted if it had been!

It can be challenging to tell a growth story like this in a 30-second spot, but maybe that’s all Peloton’s budget allowed for. Unfortunately, the story just seemed unfinished, leaving viewers with more questions (and concerns) than answers. Again, budgets dictate so much of what can be done, but the fact that this woman had, theoretically, been chronicling her bike rides lends itself so well to continuing the narrative with a series of online videos. This would not only have provided a platform to tell a more complete story, but also would have encouraged site traffic and presented more opportunities for product education and conversion.

In today’s social media-driven outrage culture, this episode is likely to be forgotten as soon as the next brand hiccup occurs. While the memory of the ad will fade into the distance, the Peloton name now has a stronger presence in the market, which could work to the brand’s benefit—especially if the Peloton team is smart about how they leverage this opportunity.

We’ve all heard the adage, “there’s no such thing as bad press.” I disagree; however, there is something to be said for how this sort visibility can raise a company’s profile, particularly in the mainstream media. For better or worse, the coverage of this story has now reached such a broad cross-section of consumers that Peloton undoubtedly has and will continue to receive an influx of search engine activity and traffic across its online portfolio. It’s how the brand team manages this attention that will define what happens next

It’s always possible that Peloton intentionally created an ad they expected would be controversial; I’m not saying that’s the case, but they wouldn’t be the first or last to use this strategy. This is a risky approach that I’m guessing doesn’t pay off as often as its architects would hope, but as long as you’ve come to terms with all the potential outcomes, I’m not even saying this is a bad idea. But regardless of the intent, when the end result is a piece of work that doesn’t reflect the brand’s identity, that’s when you need to pump the brakes.

p.s. Kudos to the team at Aviation American Gin, which is owned by Ryan Reynolds, for capitalizing on this debacle by tapping the actress who starred in the Peloton commercial to star in a “sequel” parodying the spot. Talk about jumping on an opportunity! They turned this around so quickly and executed it so well, apropos of the topic at hand, it was like the chaser everyone needed to help take down a rough shot. The official title of the commercial, which is featured on the gin company’s YouTube channel is “Gift Responsibly,” while the famous actor—on his much more popular channel—titled it “The Gift That Doesn’t Give Back. “Call it whatever you want, but for the love of opportunism, watch it.