With the legalization and subsequent boom of sports betting in New Jersey, a new industry – and with it burgeoning opportunities – emerged. To rise above the countless other companies entering the market, 3E Public Relations (PR) initiated a unique media relations program that has seen its client, Copenhagen-based Better Collective, rise in organic search rankings as well as above the competition.

When Better Collective launched its new American-focused website, US-Bookies.com, it sought to create an expansive resource that directed interested gamblers toward websites authorized to offer online betting in respective states, as well as guides and promo codes to make the experience more enjoyable and responsible.

Better Collective retained 3E PR to raise awareness of US-Bookies.com among the growing gambling community in the U.S. market, as well as support the brand’s search engine optimization (SEO) strategy for the new site. The 3E PR team is executing a successful PR campaign that has resulted in more than 800 total media placements to date. Many include backlinks to the US-Bookies’ page on sites with high domain authorities (DA). The outreach also contributed to the growing conversations involving betting odds being used to predict outcomes in politics, as well as entertainment, while improving US-Bookies’ brand recognition and SEO.

The first step in creating the plan involved identifying who would be targeted in the outreach, which helped determine the best way to cater the messaging. 3E PR zeroed in on two key target markets:

Another overarching goal was to establish US-Bookies as a vital resource for data-based predictions. As name recognition has grown and relationships with outlets established, US-Bookies regularly contributes to relevant stories.

While the objectives were clear, the rapid expansion of interest in gambling created new challenges. The prime one was that US-Bookies was far from alone in this growing market. Sports media became saturated with nearly limitless sources of gambling odds. Many of these competitors were also based in the U.S., compounding the challenge for the overseas organization. It was clear that less-occupied areas would be needed to achieve success, as they’d allow US-Bookies to be more easily established as one of the main knowledge sources.

Entertainment and politics presented new opportunities, as there were fewer established sources of gambling data on these topics. 3E PR recognized this untapped market and identified key trends that would be of interest to media. 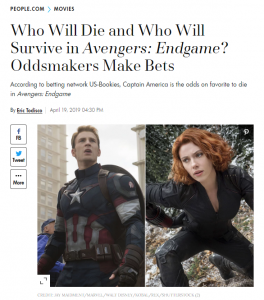 People publishes an article highlighting US-Bookies’ odds on who will live and die in Avengers: Endgame ahead of the film’s premier.

Among the most popular of entertainment stories were the final season of HBO’s Game of Thrones, as well as the anticipated Marvel Cinematic Universe blockbuster Avengers: Endgame. The media covering the curtain calls for these immensely popular franchises were constantly looking for new story angles. Betting odds provided just what they needed to keep readers enthused by offering predictions on what would happen during each franchise’s climatic conclusion.

The most popular odds-based theories were those that predicted which characters would survive and perish. While actual betting on these outcomes is not legal in the United States, European-based odds provided an interesting spin on typical fan theories. Prominent media outlets agreed, as the odds were published on sites such as TV Guide, New York Post and People.

In the political world, the 2020 election created a volatile landscape that provided endless news for the media. Betting odds were billed as the alternative source to predictions. Revised betting odds due to debate performances allowed 3E PR to use US-Bookies’ data to show winners and losers. This strategy continued for every announcement and scandal during the campaign trail. Regular outreach resulted in media placements in outlets such as Newsweek, New York Daily News and Politico, all linking back to US-Bookies’ dedicated 2020 election page.

Similarly, odds were gathered and disseminated about other political events. For example, TMZ published odds of President Trump being impeached for the first time. On several occasions, the odds were more accurate predictors than the polls. In fact, outreach highlighting the betting data’s advantages over polling numbers earned coverage for US-Bookies in The Washington Times, Fortune and Yahoo Finance. 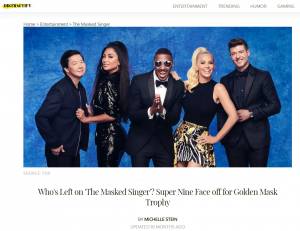 Distractify’s regular articles featured US-Bookies’ odds on who the mystery singers were on Fox’s The Masked Singer.

partake in the discussions, publishing pieces about each show to keep their readers enthused and expand on fan theories.

US-Bookies was able to provide odds on who will win Big Brother’s 21st season, which helped generate coverage in Newsday. Odds on who was under each mask in The Masked Singer also helped US-Bookies get linked in weekly Distractify articles. Catering to more growing conversations in the entertainment scene helped 3E PR and US-Bookies establish credibility in the market, further strengthening the media outreach efforts.

Success in the Results

From a creative approach to addressing the inflated competition in the sports betting market, 3E PR found success in areas that were relatively untouched, creating opportunities that far exceeded the goals. In 2019, more than 350 total placements were secured, 62 of which had backlinks on sites with DAs of at least 80. The success continued in 2020, with more than 460 total placements for US-Bookies, including 130 with DAs of 80 and higher.

Identifying a key metric to improve and creating a strategy catered toward achieving that goal paid off from an SEO standpoint. Due to these efforts, the DA of US-Bookies.com more than doubled, from 21 at the start of the campaign to its current 47. This rise drastically improved the site’s organic search ranking, allowing more interested users to more easily find US-Bookies.com. Along with the expansion of the potential userbase, this helped fulfil Better Collective’s goal of providing a more a favorable betting experience for interested gamblers to promote informed and responsible habits.

Beyond the results obtained for US-Bookies, the work also contributed to the overall growing value of betting odds in various industries. Partly because of the noted inaccuracy of polling data in recent elections, betting odds became more regularly referenced when evaluating the political landscape, specifically during the 2020 election. In fact, Trump himself referenced presidential betting odds, and 3E PR was quick to clarify what he was talking about via US-Bookies’ analysis. By entering this conversation early on, US-Bookies became a regular contributor to prominent news outlets looking to insert the latest betting odds into their commentary.

As a result of these efforts, 3E PR was honored with the prestigious Jersey Award from the New Jersey Ad Club and PRSA Pyramid Award for its 2019 work. If you’re interested in learning more about how a robust media relations strategy can establish brand credibility and expand reach among your target audience, contact us or read our other blog post about how to optimize a PR campaign.

Disclaimer: The odds posted in this article are for illustrative purposes only, as wagering on such props is not currently legal in any U.S. state. The data was based on betting markets offered by UK/European/worldwide operators regulated in jurisdictions where wagering on these props is legal.